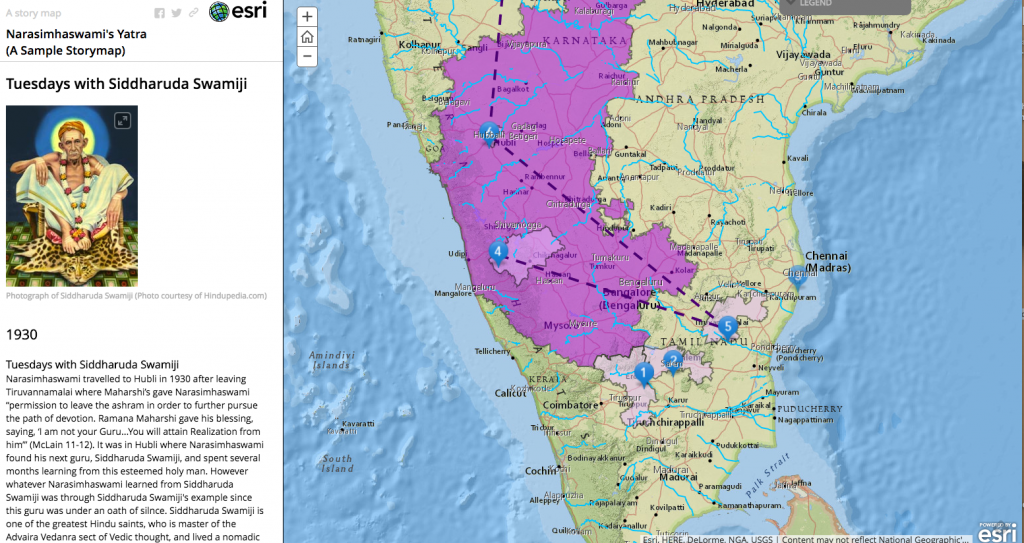 Professor McLain received a Mellon Course Grant in 2014 to redesign her Pilgrimages course, using spatial analysis to enrich student learning about and engagement with the sacred geography of South Asia. In previous versions of the course she had noticed that students struggled to make sense of readings that described abstract concepts of pilgrim journeys across landscapes that resonated through history and across generations. McLain worked with Janine Glathar and Diane Jakacki to find ways to incorporate visual and spatial considerations of these concepts into course materials and projects.

Students used ArcGIS Online to visualize and interpret biographical and cultural nuances of religious figures, pathways taken by pilgrims, and sacred sites. Relying on a variety of historical maps of India as well as GIS data layers showing religious and political regions in the country, students analyzed routes that pilgrims have taken for centuries, considered how topographical features such as rivers and mountains would affect their routes, and integrated biographical and historical information and popular culture representations of holy figures as “map note” annotations.

Students wrestled with questions of how physical and mythical spaces weave together in the experience of the pilgrim and broader concepts of faith-based travel. Placing these questions in a spatial framework gave McLain the opportunity to challenge them to think about place as going beyond merely the geographical grid.

For their final class project students collaborated in small groups on story maps: about Varanasi, called by some to be the spiritual capital of India; the sacred spaces along the Yamuna River; and the pilgrimages taken by Swami Ramdas, a saint whose teachings have guided many modern pilgrims.